Through the Looking Glass: What Snap Can Learn From Oakley 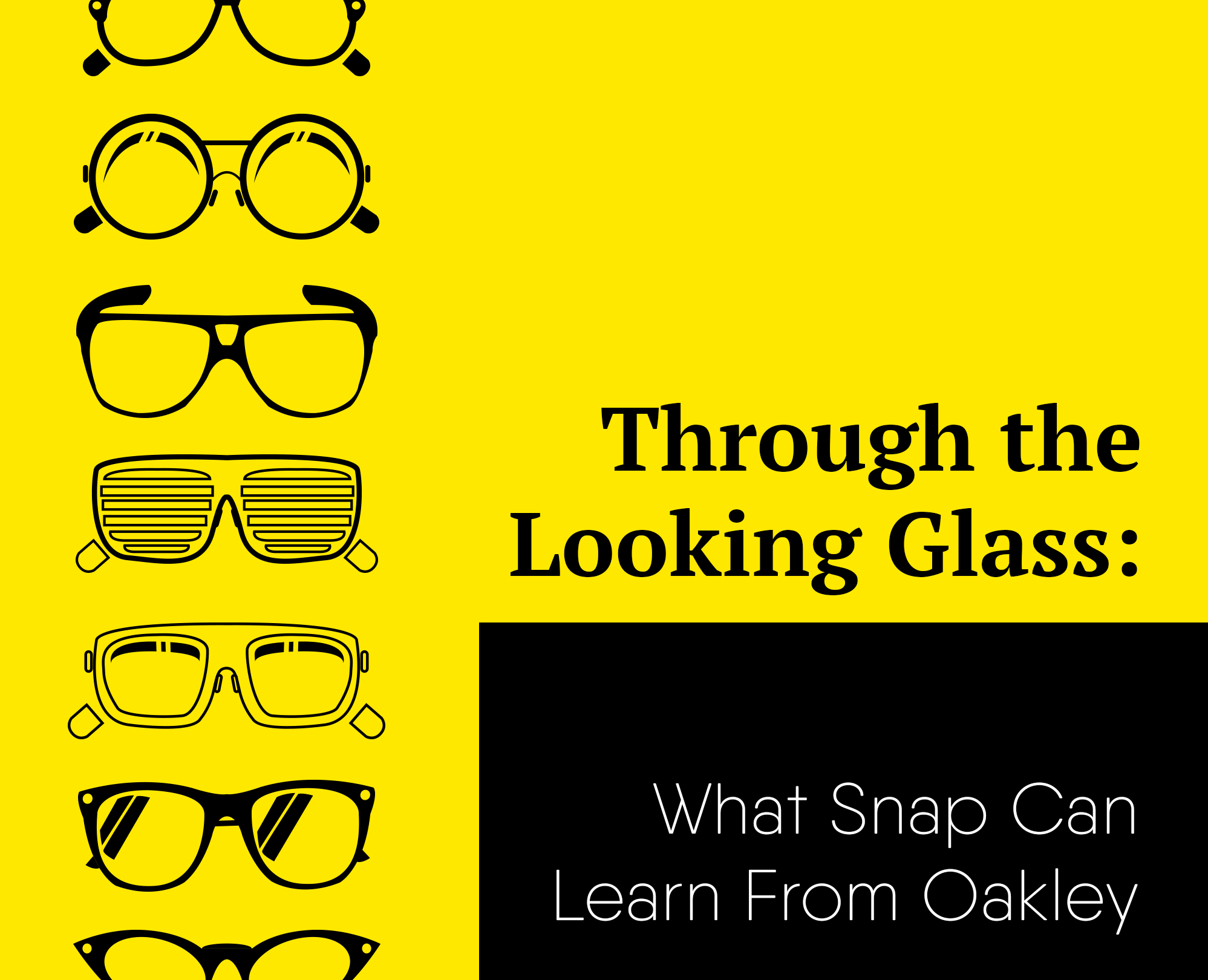 Snapchat publishes a social media app that it wants to metamorphose from a boring old messaging tool into a device that appropriates concrete life experiences and confines them to tenuous immortality in the digital realm. Much like when “Superman II” (1980) came out and we pretended our walkie-talkies were actually portals to Krypton’s Phantom Zone, except that Snap’s Spectacles seem way better.

Coincidentally, around the same time that movie came out, Oakley was reinventing racing gear and accessories for Southern California motor sports enthusiasts. With a breakthrough in goggle technology, Oakley quickly emerged as an innovator in product design that helped legitimize adventure sports. A fun perspective check of the magnitude of Oakley’s contribution to the athletic lifestyle we now enjoy, “On Any Sunday” (1971) documents Steve McQueen’s dirt racing passion conspicuously sans safety and comfort. Oakley swiftly and significantly expanded beyond the dirty masses of motocross and BMX, its products translating its genesis story into Everyman’s lifestyle. Life appears ephemeral through hardy, high-performance Oakley glasses, and the pursuit of immortality surges from an internal locus that feels far more tangible.

In simple terms, Spectacles appropriate lifestyle into a product while Oakley products cast style into life. It would seem that the timing of their respective promotions is pretty much all these players have in common. In fact, they are vying for the same face space – coveting the valuable perch of a consumer’s nose. Their respective brand messaging via video spots dropped in April reveals fascinating contrasts.

Somehow bearing both slick and gritty nuances, a video by Michael Lawrence iterates Oakley’s “One Obsession” campaign. The latest take on the 2-year-old brand theme draws a line between impulsive and compulsive behavior and celebrates vice as a choice. In a clever echo of the brand name, the title “It’s OK” functions as a subversive refrain. Opening with pre-dawn shots of a man leaving a woman in bed, Krystle Warren’s smoky voice-over intones, “It’s OK to sneak out.” It’s not until the 14-second mark that we see he’s going cycling. Or maybe he’s surfing. Aha, snowboarding. Actually, it doesn’t matter.

This is about shutting out the modern world to fight an inner battle – defying mortality, be it on land or sea. Lawrence’s dark panoramas of majestic landscapes evoke the emotional power of the Romantic period of European masterworks. In many scenes, subtle lighting on the central lone figure suggests voyeurism. The sense of naughty intimacy escalates from the viewer to the characters as glimpses of their inner demons warn that nobody should be witnessing this. Top athletes don’t behave this way. Except when they do. Through the Oakley lens, this is what happens when obsessions go too far.

In the process of pursuing your passion, Warren croons that it’s OK to just be yourself – a flawed, ambiguous protagonist. Indeed, all the fears, tears, wounds, even lies, our worst moments are just a part of it. According to Oakley, it’s OK because your kind of hidden pain isn’t hurting anyone else. SVP of marketing David Adamson hopes this campaign provokes a social “conversation” about the cost of obsession. The timely sentiment resonates with cultural uprising, walkouts and protests. It validates doing what one must to fulfill one’s personal truths, no matter how raw, defiant or messy. The brand frames triumph as built upon inevitably inappropriate behavior and it’s an open secret – sorry, not sorry.

Conversely, the new Spectacles 2.0 campaign by Snap bubbles with clean, carefree optimism. Literally touting a “hands-free” lifestyle, the video conveys the giddiness of letting go of a roller coaster restraint bar. Skateboarding with balloons, high-fives while cruising, blocking rainforest foliage from messing your hairdo … you know, all the activities that you’ve dreamed of doing while shackled by a smartphone. “Press play,” and your life transforms into boisterous innocence on endless vacation. Highlighting Spectacles’ water resistance, the video is awash in squeaky-clean fun that won’t even harm sea turtles. Now that’s really clean.

Shot in kaleidoscopic candy colors and pumping with a pop beat of “we’re gonna have it all,” more than 60 cuts are crammed into the 1-minute clip. The visual disorientation contracts into clarity when someone clicks on Spectacles, narrowing the view to a perfect joyous moment. This attempts to upsell the fact that the camera shoots video in the round. Conceptually, the circular image manifests a true first-person perspective in a reverse fourth-wall breach. GoPro is significantly better at this task without the weird 1980s “A-Team” binoculars effect, and still its stock suffers. In comparison, Spectacles seem gimmicky and tired already, bestowing an unsurprising loss for Snap Inc. Furthermore, with a 10-second time limit, there’s little likelihood of Spectacles spontaneously turning anyone into a successful auteur. Spectacles are for the social media FOMO crowd obsessed with curating themselves into insensibility.

Is it too soon to recall how maven Kylie Jenner schooled Snap for $1.3 billion? No, you can always be too late to protect your brand, but never too early. For any possible redemption of its brand and the future of Spectacles, Snap ought to borrow directly from the Oakley playbook. Legend has it that unpaid-for endorsements by world-class athletes designated Oakley as a product of choice. Despite acquisition and absorption into megaconglomerate Luxottica Group, Oakley brand stewards continue preserving this reputation. Carefully vetted professional athletes such as Chloe Kim and Bubba Watson embody the edgy Oakley brand values yet have wide appeal.

Perhaps Snap might find a brand champion with skater Christian Flores. His video on YouTube’s RIDE Channel boasts 1.2 million views, whereas Spectacles 2.0 caught the attention of a mere 56,800. Posted in 2016, Christian’s narrative is the real “It’s OK” deal. It would be fascinating to view Christian’s next obsession through Spectacles. And he’s looking for a fresh challenge: bigger stairs. Just not something ridiculous.